When I’d finished in the project in Bangladesh, my heart’s desire was to take time off and pass through Europe on the way home. But the bosses insisted I go directly back to San Francisco for a medical check, thanks to my unscrupulous predecessors who had found an equally unscrupulous doctor in Bangkok who told the American Embassy that they’d contracted incurable diseases that would quarantine them from returning to the United States. The company would have to pay their salaries and expenses until the matter was resolved. So they had a free ride to play with all the bar girls and masseuses their twisted little hearts desired. I told the company I would never do that; I just wanted the time off. But they wouldn’t listen. I was issued a ticket from Dacca directly back to San Francisco for a check-up to ensure I had no missing limbs, persistent parasites or communicable contaminations.

But luckily, we had made contact with a small element of the Black Market to buy alcoholic beverages, which were illegal throughout the country. Certain local airline employees would sell any bottle of booze that accidentally stuck to their fingers as they’d passed through first-class. Being mostly Muslims, they didn’t drink so they had no idea what any of it was worth. So a can of beer, a sample size of Jack Daniels or a split of Moet Chandon all went for the same price… a buck.

When I called our contact to stock my going away party, I slipped him my airline ticket and he later came back with the change: a flight package from Dacca to San Francisco with stopover privileges in New Delhi, Rome, Amsterdam, London and New York, all valid for a year. I could spend as much time as I had money, and planned to apply an ancient adage when I finally returned, “It’s easier to beg for forgiveness than to get permission.” Little did I know it would take me four years. So having had my fill of extreme poverty, I booked my first flight through to Rome. But I still had a layover in Delhi to arrive at 8:00 am and leave at 2:00 am the following morning; nothing a seasoned traveler couldn’t handle, but still with the question of how to pass the time.

On arrival in India, I had hardly gotten through customs when a short, brown-skinned gentleman of about 40 with thick, curly black hair surprised me with, “Excuse me, sir, you look like a man with a veddy long layover.”

“Eet ees my job to read the faces of the people, and you have the face of a man with a veddy long layover. Tell me, when does your flight leave?”

“You do! You do have a veddy long layover.” I thought of Tweety. I did! I did taw a puddy tat!

“So you were right. What happens now?”

Hmm. I thought. That can’t be a bad idea at all. It was a time before teller machines and rampant international credit card use, so most of my peer group always carried about $500 cash… along with a tremendous thirst. The money wouldn’t be a problem but the thirst might. “Would that include beer?” I asked.

He pondered a moment. “Well, I suppose I could include a few bottles.”

A few bottles wouldn’t have done it, and I didn’t want him to lose money. So after a bit of thought, I asked, “Do you have a cooler?”

“OK, I’ll tell you what. I’ll buy the beer and ice and still give you the ten dollars. After all, it’s a veddy long day.”

“Veddy good, veddy good indeed, my friend. But do you mind if my brother he comes along?”

“Why should I mind if your brother he comes along?”

“Well… he does not speak English.” I was puzzled that he seemed so worried about it, but I learned later in life that his brother would not be as well included in the synergy, a very important part of Third World togetherness.

“So how about he drives and you and I drink beer and see the sights.”

“Well,” he chuckled, rolling his head from side to side in typical Indian body emphasis, “I might not drink so much beer, but I can certainly help you see sights. Come with me and we go.”

Outside, we found his brother waiting in a 1953 faded two-tone green Chevy four-door sedan with the steering wheel on the right and the stick-shift lever on the column. It would be obsolete in the first world in those times, but perfectly good in the there-and-then. After hearty greetings and smiles, we entered the spacious back seat to begin our adventure. My guide spoke English to me, but I have no idea whatsoever in what language he spoke to his brother. But soon enough, I was into a cold one with a full cooler between us, and off to see New Delhi.

Temples were his favorite places to take tourists: astonishing giant buildings with elaborate mosaic works of art, breath-taking domes and dozens of columns. But many had dress codes. In some, I had to remove my ball cap, in others, my shoes, others, my socks too, and in some, I couldn’t enter at all but could peek through the door. In the market places, we saw men with snakes rising out of baskets to dance to flute music, other men walking on coals wearing nothing but loin cloths and turbans and others climbing ropes attached to the sky. Millions of people buzzed about various food items for sale, with attendants shooing away insects with wicker fans or faded rags of various, once-bright colors. We snacked on mysterous tidbits; my favorite being the tiny pies with a savory meat and onion filling… all accompanied with our ice-cold beer. But shortly after sundown, I started getting hungry for a proper sit-down meal. My friend suggested a little-known but long-time-standing restaurant that served a succulent chicken dish whose recipe had been handed down through the ages. My favorite menu choice being any concoction I’d never tried before, I cheerfully consented.

After moving around a few pedal-powered rickshaws to squeeze into a parking spot, I noticed a faintly musty smell of dirt and old wood as we descended the stairs to the underground restaurant, lit by candle holders stuck into the hardened mud walls. Immediately I found the bathroom with a toilet that looked like a large ashtray set into the ground. To use it by women or men for number two, one must hunker with feet resting on the grooves that looked like places for enlarged cigarettes. I’d seen many of these in Bangladesh, so it was no surprise. After taking a long overdue leak, I found my friends waiting at a roughly hewn wooden table with bench type seats. As I sat down, they both got up and went to the rest room, leaving me alone. The waiter came and artfully placed three large white terry cloth napkins on the table, along with three deep bowls of water with a slice of lemon floating in each. Water! Beer had been great for attitude adjustment and imaginary immunization against infection, but not so good to relieve the natural thirst from the heat and dust of the day. Water! Cool, clear water!

My mind raced with the tourist warnings I’d heard since childhood. Don’t drink the water. But the thought was trumped by my logic of the moment. If they can drink it, I can drink it. I picked up my bowl and gulped down about half of it.

The brothers returned from the bathroom engrossed in their chatter and sat down, moving their attention to washing their hands in their bowls and drying them with the napkins. My guide nodded to me to do the same, then noticed my bowl. Behind a furrowed brow, he pondered aloud, “Why the waiter only bring you half a bowl of wash water?” Then it hit him. “Oooh, you didn’t drink that did you? Oooh, you gonna be sick! Nobody in India drinks wash water.” He advised me to go to the restroom and try to throw up, but I couldn’t. It reminded me of the stories of the gluttonous, hyper rich Romans passing the feather. It was beneath my economic ideology to deliberately throw up. After rationalizing perhaps the good wogs in the food will kill the bad wogs in the water, my attitude adjusted enough to enjoy the meal and the company. But my healthy attitude didn’t last long.

The benevolent brothers returned me to the airport at 11:00 pm to meet the three-hour-early recommendation for international flights. Checking out of India was no more difficult than checking in, leaving me a comfortable window to catch a nap in the departure lounge. But two things kept me awake: the gurgling and rebellious symphony developing in my stomach, and the delightful sight of an adorable woman of about my age, seated far enough away to make an accidental meeting too obvious. But at least I could dampen the worry of my impending illness with the beauty that surrounded her. She carried that air of a confident woman who understood there was an actual world existing far beyond the concepts barked out by marketing minions who pump consumption as the only source of happiness. Her slightly expanded figure would certainly not warrant her a spot in a TV commercial, but her inscrutable smile would certainly warrant her a spot in my heart. I dreamed on, but thought better of making an ass out of myself with the introduction, “Hi, I’m sick because I drank wash water.” But Destiny stepped in.

As I settled into my window seat on the plane, worrying that I may not be able to reach the john in time, the inscrutable smile caught my attention as it promenaded down the passageway and placed its preciously rounded posterior in the aisle seat of my row, offering a “Hello” in a profoundly distinct British accent, leaving the door to conversation wide open. She had finished her job at the British Embassy in Kuala Lumpur, on her way to Scotland Yard to study code for her next assignment in Cuba, and would spend six days in Rome with her girlfriend who would arrive from I-cared-not-where. After explaining my situation, we agreed it best to swap seats, but after my second emergency trip to the loo, her motherly instincts kicked in and she suggested I take the center seat so she could wrap me in a blanket and coo away my concerns. In Rome, she would meet her girlfriend at a delightful little bed and breakfast in front of the Coliseum. If I stayed there, she would gladly help me find appropriate medical attention to better enjoy our time in Rome. I nodded, off thanking Destiny for Indian wash water.

Continued in “Pasta with Oil and Fruita You Boil,” soon to be written. 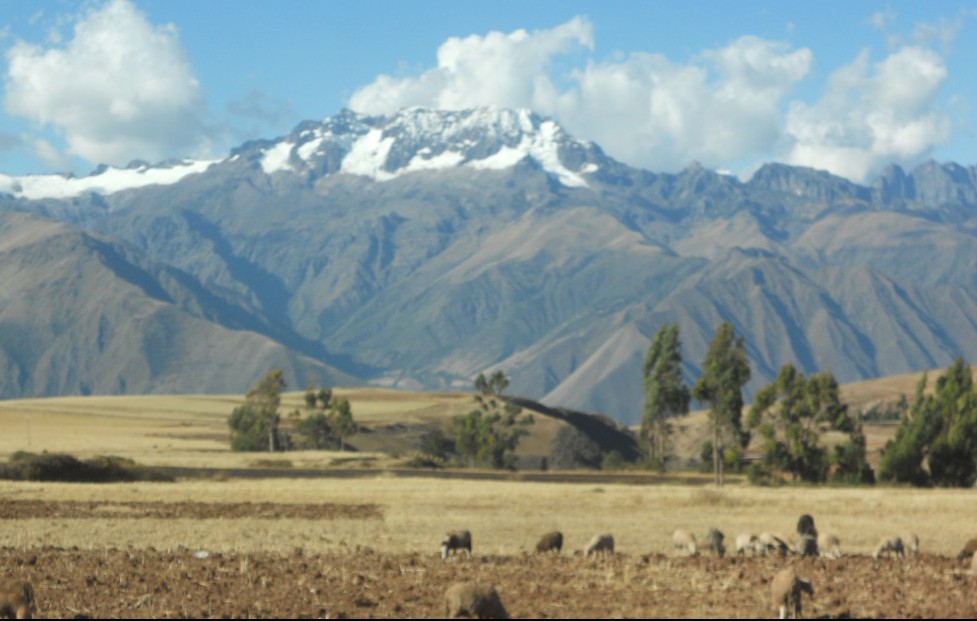